HomeKeep talking, Break the wall of stigma around Menstruation

Keep talking, Break the wall of stigma around Menstruation

When the pandemic hit the world, the healthcare community focused its efforts on research and care for the infected people, but this shifted their focus from the other issues which plagued our society, including the lack of menstrual health awareness. Women, especially in semi urban and rural areas were confined to their house without any access to hygienic and sustainable products to manage their menstrual cycle. They earlier used to rely on the PHCs and nonprofits to provide them with the necessities, but now the pandemic refocused their efforts leaving these women in an extremely vulnerable situation. This is when Padsquad stepped in and created a community of women who supported each other through this testing time.

In conversation with Chhitra Subramaniam, Co-Founder of Padsquad, we discussed the difficulties women faced during the pandemic and the support provided to them to ensure they have a safe cycle despite the hurdles. Padsquad connected with women who were economically deprived with the lockdown worsening their situation as they did not have enough money to buy the basic necessities including food. They realized the grave situation and decided to step in by distributing sustainable menstrual hygiene products including menstrual cups and reusable cloth pads and helped these women to tide over the tough times. During their interaction with the community, they came across women considered menstruation to be a shameful event and avoided talking about it. They decided to address the situation by increasing awareness among these women and helped them accept it as a part of their normal routine, to let go of the stigmas attached to it and support each other throughout the ordeal. Most of the adolescent girls were forced to drop out from school due to family pressure and lack of access to menstrual hygiene products to help them manage their studies during this time. The lack of awareness was so severe that one of the women she spoke to did not know that the menstrual blood and urine were discharged from different outlets in her own body, despite already having her own children, she had never considered her body to be important enough to be taken care of. This lack of awareness combined with the severity of the stigma motivated the team to connect with women in 25 cities and start a new era of sustainable menstrual hygiene practices.

As Chhitra aptly said, “It is only when we keep talking about it, and engage with schoolgirls, can we get rid of the stigma”. Girls around the country are groomed from a very young age to believe that menstrual hygiene is something they should be ashamed of and should never be spoken about in the public. But this leads to generations of women who suffer in silence and never discuss their pain. Padsquad, it is taking the first step in starting a conversation about sustainable menstrual hygiene practices across the country and empower young girls to bleed freely. 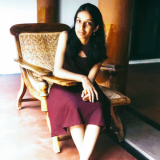 Sharanya is a Dentist from Bangalore, who is passionate about volunteering with NGOs and has so far worked with over 20 organizations in various positions as a content writer, HR executive, Research and policy assistant, Editor, Developmental journalist, Media content research assistant and many more. She believes that it is our duty to do good and be good and wants to work to make this world a kinder place.