Nelson Mandela once said “Disabled children are entitled to an exciting and brilliant future”. But sadly that is not the situation in our country and it is unfathomably disheartening to see the dire condition of helpless disabled and mentally challenged children striving to find acceptance to lead a normal life in our Indian society. The situation seems to be much worse in the rural areas and this was something I learned during a visit to a sparsely funded special needs school which was the only one dedicated to this purpose in a huge number of villages surrounding it. It was saddening to learn that the parents of the few children admitted there would hardly take any initiative in supporting their children’s progress and the centre was not funded well in spite of impressive results attained although barely two or three teachers were working there with heartfelt empathy and the warmth in their heart could be felt by anyone who met them. There was this little kid with Down’s syndrome who had a habit of hugging and kissing everyone he met and this brought a smile to all of our faces. I couldn’t help but go back and think about how other children with special needs are living in our country. I ended up finding many inspiring stories but one intrigued me the most. I heard about Satya Special School in Pondicherry and I was luckily able to get in touch with the founder, Chitra Shah whose love for helping out those in need impressed me immensely and also her brilliant storytelling skills that kept me enraptured throughout our interaction is absolutely noteworthy.

Chitra Shah is someone who found her calling in social work and has dedicated years of her life in helping children with special needs getting access to a more inclusive education that would pave the way for numerous employment opportunities through specialized intervention. It all started at the age of 15 when she had to endure the consequences of social injustice through the death of her friend who had succumbed due to burn injuries due to dowry issues at such a tender age. She then started volunteering at the very same hospital and learnt about numerous such unfair stories. Having been born and brought up in a fairly conservative Hindu family, her choice of letting go of her seat at an eminent university in Chennai to do a degree in social work and then masters as well after being inspired by a speech given during a workshop at IIT Madras was not a welcomed one. But she was able to reason out her decision and convince her family to be supportive of her educational decisions.

Before she got married, during her masters she did a thesis on female infanticide which was a practice in a place within a particular community in Madurai. As soon a newborn infant was found to be a girl, they would immediately kill the child. This practice happened to deeply disturb Chitra. When she asked one of the mothers why they were doing this she said “Our lives are terrible and the last thing I want is the girl child coming through me having to live the same kind of horrible life. Please find us a place where we can leave these babies without revealing our identities and then we will not kill the children”. This incident encouraged her to come back and propose to the government of Tamil Nadu how they could help out this community through the ‘Cradle baby scheme’ in many hospitals where the mothers could leave the child if they didn’t want it with no questions asked and the government would pay for its education or they would be adopted or they would be sent to orphanages. She was able to get in touch with Dr Jayalalita who was the chief minister at that time and she helped out greatly by intensifying and improving the outreach of the existing scheme.

Back in 1992 there was an incident in that took place in Chitra’s life that made her rethink her choices and give up social work and join a company to work. This was when she heard about how young girls from south India because of their dark skin colour were being sold into the sex trade in Bombay for amounts as meagre as Rs 20. She gathered a team of around five people and knowing she had support from the chief ministers office, she tried to relocate these sex workers. They would sit in a matador van outside the brothel houses and observe the movements of the owners and clientale. Then at night they would sneak in and try counselling these girls to come back with them to Tamil Nadu and told them they didn’t have to live like this. They were able to convince about 650 of these girls by the end of three weeks but sadly when they came back by train to Chennai awaiting a hero’s welcome but there was no one to greet them and they realised that Jayalitha was thrown out of power and the whole group was stranded and there was no one to help them. At the end of it there was a lot of newspaper coverage of the event and Chitra’s picture came in the newspapers among the sex workers much to her mom’s disapproval. The whole project was futile because the owners from Bombay were the only ones with the picture of these girls and they came and took them back. This incident led her to give up social work and get a job and then get married.

Chitra and her husband loved to Pondicherry and she had a son but sadly she did not find happiness in her lifestyle of being a housewife. This led to her having to visit a psychiatrist (who was also a special needs expert )because her husband was worried if she was going through depression. The doctor realised that she was just a bored housewife and told her that she seems to have some counselling skills and that she could help him out at the clinic. Every Wednesday at the clinic was dedicated to children with special needs. There was one particular child who was a 13 year old obese girl with Down’s syndrome. She came with cut marks on her hands and legs. The doctor suspected the child to be going through some sort of abuse and told Chitra to pay a visit. The address of their house was surprisingly that of Pondicherry’s garbage dump yard and there were two rows of huts with one hut that was isolated and she asked for the mother and was told that she was out picking rags and was told to wait. As she waited she heard muffled noises from inside the locked hut. When the mother came and opened the door that was locked, to Chitra’s horror there was the same child and she was tied to a chair with nylon ropes and there was an unbearable stench due to the excreta and urine. This was how the mother would leave her child every single day. But the smile that light up on the child’s face as she saw the door being opened was something that even today gives Chitra goosebumps. When asked why she was doing this the mother told how her husband ran away as soon as he found to this was a special needs child and that her family did not help her and she had no education and could not get a job and this was the only way she could put a meal on the table. Then Chitra told her she cold go to the anganwadi if food was the problem, and that it was not a reason to  tie her p and lock her every single day.then the mother asked Chitra something that was the reason that led her to start Satya special needs school. She asked her “if you came home one day and found out your 13 year old child is pregnant, what will you do” . She then went ahead and told her that her daughter had been sexually molested twice and she had to get her aborted and that this was the reason she had to lock her up and that this was the situation with many poor children with special needs. This incident had a profound impact on Chitra.

Chitra started Satya as a daycare centre for 20 children with special needs mostly those belonging to single mothers in 2003. As of today, it has an impressive strength of 1200! They cater to the educational needs of people with any sort of disability and they have students ranging from infants to a 44 year old man! This is because of an impressive “NO REJECTION POLICY” that they follow at Satya. Their initiatives include an early intervention programme, inclusive schools programme, alternative inclusive centre for education, multiple disabilities centre, vocational training centre, prosthetics and orthotics unit, a mobile therapy unit, village resource centres and satellite centres, among others. Early intervention is given predominant attention because the first 3 years of life are critical for the development of a child. Satya Special School’s Early Childhood Programme combines the speed of early identification through the new-born high-risk clinic and the efficacy of services through the Early Intervention Centre (EIC) for the optimal development of the child.

When asked about her view on the current rural healthcare situation in India, she says “ Pondicherry has 6 medical colleges. Inspite of that, although there is access to medical care, there is no access to quality medical care and that makes a huge difference”.  She feels that people nowadays seem to be doctor-shopping because there is a wide variety of specialists but somewhere there is lack of awareness regarding basic issues. In rural areas there is a problem of repeated pregnancies and yet people don’t use contraceptives. She talks about prevalence of malnourishment in rural areas inspire of the government providing food and folic acid supplements at anganwadis and al this drives home the fact that there is lack of ‘quality medical care’ in most areas.

Chitra Shah is a living example of how even one person can bring about a humongous difference and transform the lives of countless people when one puts their mind to it and find themselves driven by passion and a will to do good. Her actions and her impact will live on. The happiest people are those who lose themselves in the service of others and for a social worker, the needs can be demanding but the impact they make on this world are truly intangible. 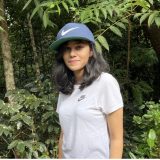 Sneha Reddy Pulkurthi, MBBS, 2nd year, MS Ramaiah Medical College, Bangalore I enjoy painting, trekking, reading, watching movies, series and listening to music. I come from a family of engineers and it’s always been a dream to do something out of the ordinary and I realised medicine would be challenging and would put all of my resolution at test and also the idea of serving society seems to be to be extremely noble. I consider myself to be a perfect mix of a hard working and party person. I’m extremely social and have had no problems making conversations with just about anyone. I happen to be quite indulgent in academics but mange to get involved in extra curricular activites as well.